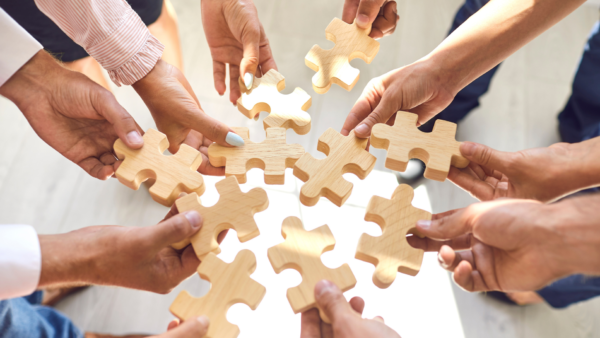 Organisations often point to culture and the need for a culture shift when there is conflict, a lack of communication, or a bad experience from a change initiative. The post-covid change to ways of working has only accelerated the need for effective organisational culture change in Higher Education. Here, Gretel Stonebridge, SUMS Associate Consultant, uses the Johnson Scholes Cultural Web to highlight the importance of understanding culture when making change.

We have all read books about the theory of successful organisational culture change and sometimes we are tempted to simply lift ideas and methodologies or copy from others’ successful change. But have you ever wondered why some change approaches fail – even where all the “rules” have been followed, and all the theory, and tried-and-tested methods have been adopted?

It is widely acknowledged that change does not happen without buy-in from the people impacted by the change. People and their behaviour make up the culture. We must recognise the basic culture in place when seeking to initiate change. An approach to change that works for one culture may not work for another.

This post focuses on the  Johnson and Scholes Cultural Web – not just as a descriptive tool for culture, but as a practical tool for managing change. It follows on from discussions at the SUMS Change Community of Practice where change leaders from across UK universities discussed:

What is the Johnson and Scholes Cultural Web?

Organisational culture is described as: the way things are done, the unwritten rules that influence individual and group behaviours and attitudes.

The ‘cultural web’ is a visual tool designed to help explore the range of elements that contribute to organisational culture. Gerry Johnson and Kevan Scholes developed the Cultural Web in 1992. They did not try to specify a best culture. Instead, they stressed that by analysing each element, teams would be able to identify levers for, and blockages to, success and use this intelligence to develop and deliver their strategy. 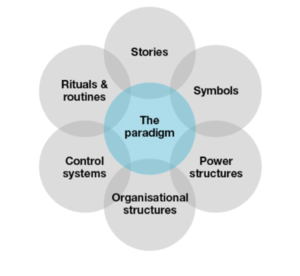 The paradigm in the middle of the Web is the set of assumptions about the organisation which are taken for granted as “the way we do things around here”. Paradigms are underpinned by:

Practical Applications of the Culture Web

Analysis of the culture using the web can also highlight the different sub-cultures in place:

“We used the web in facilitated sessions with staff to compare cultures and identify change impact when merging two schools. Outputs included an assessment of similarities and differences in the culture and actions required to mitigate the impact of any differences.” – SUMS Change Management Community of Practice Member

One Change Team used the web to develop a new continuous improvement approach, using it to map managers’ responses to a previous change initiative.

The change lead then displayed interview notes and learning points on a Cultural Web template and used the analysis to draft a central paradigm. This paradigm was then used to develop a continuous improvement culture.

The Change Network debated the best time to use the Cultural Web and identified several opportunities:

The group finally concluded that the tool is flexible enough to engage and involve staff at any stage in a change programme!

“A change in organisational values does not necessarily drive culture change. Culture is driven by what people say and believe – often from historic events. Agreement to a set of values in formal meetings often does not translate to what people say in a closed environment”.  – SUMS Change Management Community of Practice Member

Putting in place opportunities to actively listen to staff gives senior leaders, managers and team leaders real insight into staff beliefs. This then helps to inform the development of approaches to change and strategic planning.

Senior leadership “walking the floor, opening closed office doors, engaging in water cooler discussions” are all considered important in understanding the culture. Encouraging dialogue throughout the university can constantly give leaders a fresh picture and enable them to celebrate successes with their staff.

One member of the community used listening events; organised and attended by senior leadership following learning from a culture web analysis, to encourage staff engagement. Café style events were held where leaders sat and listened…

“We had the Student Lifecycle Change Programme which made changes to attendance management and mitigating circumstances. At the same time there were radical staff structure changes going on. The events made leadership realise that all these changes were hitting the same staff at the same time. Leaders could hear what staff said but they also had the chance to explain the reasons. Staff could then understand. I also witnessed myth busting.” – SUMS Change Management Community of Practice Member

Summarising our discussions and as a final learning point, the group felt that not understanding levers for success or barriers to success makes reflection and learning difficult. Knowing not only what has worked but why it worked, ensures that future programmes of change can build on successes, and avoid pitfalls experienced. Recent events have accelerated the need for cultural change. Delivering successful organisational culture change is an important factor that separates those universities who lead the pack in a competitive market from those who lag behind.

SUMS is working with universities across the UK to address cultural change and support long-term sustainability in this area. For support with a review or analysis of your organisational or team culture, and development of a culture action plan to support your corporate strategy, please contact us sums@reading.ac.uk.

The Tensions and Complexities of TOM Design in Higher Education

Why Every University Needs a TOM (and Who is TOM Anyway?)

Change Management in Higher Education: Pre-, During and Post-Pandemic

Harnessing the Revolution: How Service Design Can Transform Higher Education

We use cookies on our website to enhance the performance of our website and provide the most relevant information and messages to you. By clicking “Accept All”, you consent to the use of ALL the cookies. However, you may visit "Cookie Settings" to provide a controlled consent.
Cookie SettingsAccept All
Manage consent